I've been itching to buy some Golden paints since my class at Art from the Heart last month. So I thought I would treat myself and buy some payday paints. I got a delivery of 5 Golden paints yesterday and I wanted to play with them as soon as possible. The mop up tag I had from the 'What's your poison' canvas was just the ticket, for some painty experimentation. 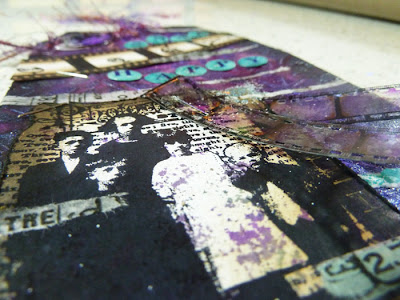 I used the rest of my modelling paste from the last canvas with a flower stencil to give some texture to the tag. 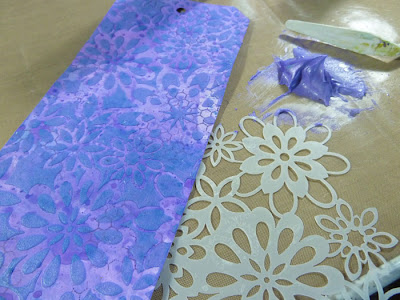 I used some Pashmina Glimmer Mist, Interference blue and green & magenta Golden paints on the modelling paste to give the flowers some depth. I really love the effect of the interference paints. 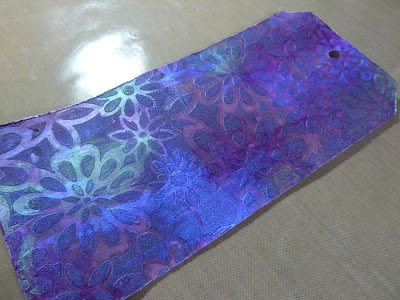 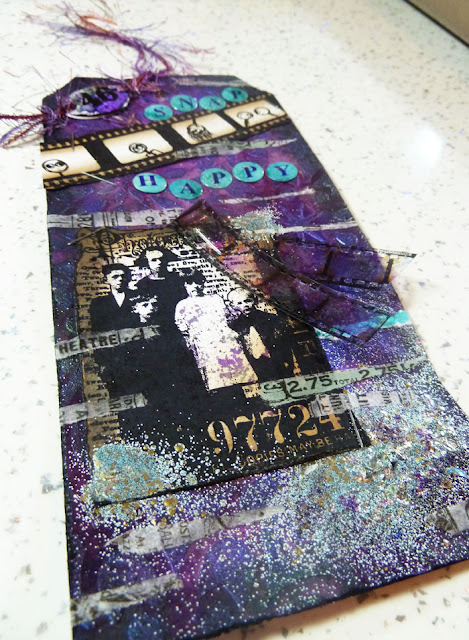 I drew my own little heads on the film. They look like they're having fun.
Oh and I used Adirondack alcohol inks on the number plaque & the acetate film strip. 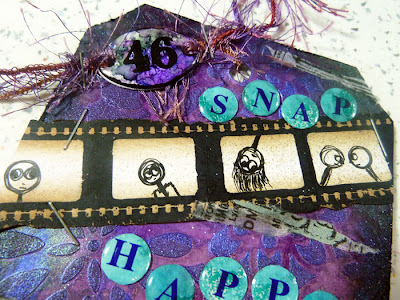 Hi Michelle, your tag is GORJUSS ♥ Ooooh, I so love the background. Hope you have a wonderful day. Thanks for all your lovely blog comments. Gez xx

This is fab hun, loving the stenciling on the background, those flowers are delicate but striking. x

That's a cool take on the recipe. Thanks for dreaming with us at TIO this fortnight.

very cool tag, I think thos kids on the stamp are so scary....
Love the drawing on the film tape, thanks for sharing at TIO

Wow, I love the texture on your tag, and all the lovely frantage embossing. Thanks so much for sharing with us at TIO this time x

Hi
Amazing texture and your tag has a fun, quirky quality to it.
Wishes
Lynne

This is awesome! You used so much on the tag and yet it is perfect balanced.

Michelle Webb
Stockton-on-Tees, Teesside, United Kingdom
I live in Teesside in the North East of England. By day I wear a high vis jacket, a hard hat and get covered in mud as a geologist, but in the evenings I like to clean up and get covered in colour instead! I'm 49, have a grown up son, a granddaughter and 6 very happy cats. I went to art college 33 years ago, and did the odd sketch since then. For the last 10 years I've been making mixed-media art canvases, doing some art journalling and altered art pieces, but this past year I've been dabbling in a bit of watercolours and oil painting too. l just love putting paint on new blank canvases, be it mixed-media or fine art. I occasionally like to get the sewing machine out and do a spot of sewing too. I just love all crafts and can change my mind like the weather, flitting from one project to the next. But don't we all. xx

Feel free to email me 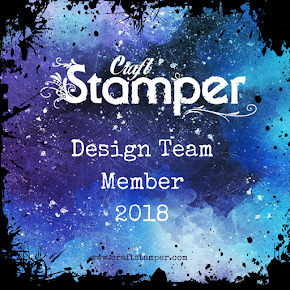 I teach regular workshops at AFTH 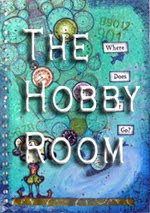 Proud to have been on the following Design Teams

Proud to be guest designer for Sept 2012

Try it on a Tuesday 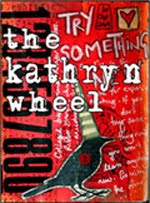 My card designs, journal pages and other crafty makes are copyright to Michelle Webb, they may be used for inspiration only, please do not use my photos or card designs to enter competitions, publications or gain recognition for them. Thank you Michelle